Today, I opened the old cans of paint to touch up some spots. Most of them were just like the one below. Not bad by itself, but there is a multiplication factor that occurs making the house look dirtier than it actually is. I’d waited too long and dinginess had set in.

So with paint well stirred and brush in hand, I set out to conquer and create a fresh appearance. I also wondered about the origins of some of these marks. The ones near doors or where pictures fell were obvious, but the one behind a chair or the one in the middle of an otherwise unscathed wall that just happened to be knee high – how did they originate? It doesn’t really matter. They need to be fixed. But still, I wondered. And I know that these marks, these scars will reappear. Paint is a temporary fix, but maybe I should be more proactive and not wait until so many places are visible next time.

Thinking about the scars on my walls got me thinking about life and the scars I know most of us carry. Where did my scars originate and how do I cover them? I do believe that most of us have some control in the paint we choose and what we decide to paint over – prayer, faith, friendships, smiling at adversity, staying busy, taking care of our physical and emotional selves – all part of the paint job. If I’m  consistent in the application, the nicks and marks are rarely noticeable – even to me.

The library is far enough along that I can walk away for a couple of weeks. Nonfiction started in an odd place, so I emptied a wall and started shifting.

That empty book case will have to go somewhere else when I get back!

There are 100s of things I still want to do, but for a few days, I’m going to rest, think about conferences and lesson plans, and plan what to do next!

If you’d like to see all the pictures of this summer’s progress in one place, visit my Pinterest Board.

I know, I know, it’s been gone for ages. Still nothing else is as easy or as comfortable as it was. I was already in Google. It was so convenient. Now I have to open something else. I’ve tried dozens. Some are ok. Today, I’m trying Bloglovin. We’ll see how that one goes. *sigh*

I’ve been reading a lot about paper sizes, qualities, textures for various things I’m thinking about for the library. I had no idea what all the numbers stood for – A4, A1, A???. Here’s a chart just in case you were wondering too. From Papersizes.org.

Easy is finished enough to make station plans. Each section needs some work as the shifting of books was done for space requirements and not with *finding the book again* in mind!

Nonfiction has been thought about, but no books have been touched yet.

But I really like the way it’s looking. Lights are still out due to the heat. 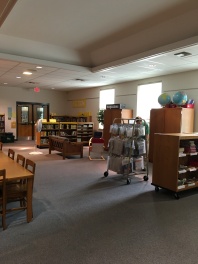 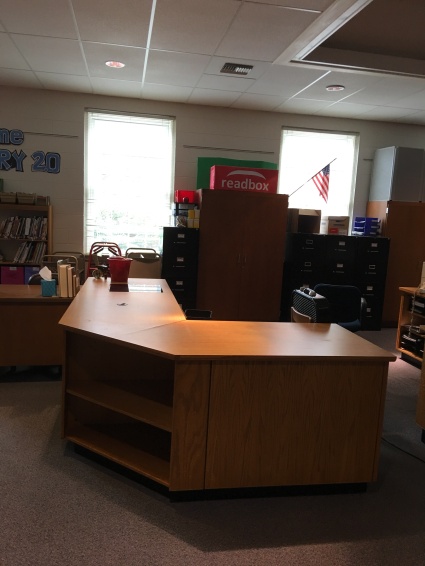 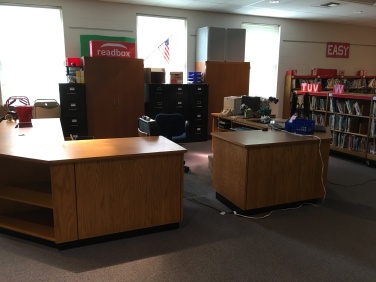 After day 1. I forgot to take a picture before I started. Looks like a used bookstore. The lights are out because there is no AC. (Insert big sweat drop here.)

Last week, the carpets were cleaned at school. I thought they would be done early in the week, so I could go in on Wednesday and Thursday, but didn’t happen. I didn’t get to go in.

So, instead I took a nap most days. Naps are really nice in the summer.

Whew! Not really – it’s fabulous to have a week to do that kind of stuff!

The thing I most enjoyed was finding information on Bullet Journals. (Thank you Pinterest!) I’ve already told you about my love/hate relationship with planners. Digital or notebook? Monthly/weekly or Monthly/daily or Weekly/Daily? What is the perfect combination of pages that gives you enough for notes on the fly? How do you find those notes again?

OK, I know for some of you, I’ve entered into the nutcase arena. But I also know that some of you know exactly what I’m talking about. *ahem*

Here are some sites to see what it is:

There are hundreds and hundreds of of sites and videos. What a time sucker. I finally had to stop reading and watching and grave a notebook and some pens to start.

Pictures. Some of them are works of art.

I still have a few composition books left over from when I taught Math, so I set one up using one of those. I want to try one with grid paper in it next time though. And I think that I’d like to put a calendar list for each month at the beginning so it could serve better as a calendar too. I may go ahead and do that at my current spot, just because I think I’ll go crazy without it.

What I don’t like: Lots of writing. I was making a ton of lists anyway with the library flip, but I already had a skeleton page. Mine is functional but not pretty. I’m going to work on that. And I think I’m going to run through a notebook really fast! Hoping that will slow down some after the summer.

What I do like: Everything is in one place. The index helps for finding things that were lost in my calendar. I’ve got all the pages I need for a certain day if a lot is going on.  There are oh so many ways you personalize it for what you need. You can use an expensive notebook or a cheap one.

I wasn’t sure I’d like the monthly calendar list, so I drew off a grid for July and left a column for goals. For August, I just made the list like they show in the video on bulletjournal.com. I think I like the list just as well (if not better) and it was much quicker. It’s also neater looking.

I’m doing some reading on how we as librarians can help with the growth mindset. Here’s a start in the last paragraph: “discuss that it’s effective research strategies that librarians can hel them with, and that these strategies and asking for help are not supplemental or remedial, but part of the very proscess of learning itself.”

Rule Number One: A Library Blog

Lots of educators and librarians are becoming more and more aware Carol Dweck’s mindset research – the belief that talent and ability our not fixed, but that our efforts, combined with deliberative practice and expert feedback, can help us improve our ability to learn within a particular domain – and, as with any good intellectual idea (cf. the Humanistic Psychology Movement), people have started to adopt a superficial understanding of the idea that leads to poor applications of it.

Dweck has recently addressed some of these misunderstandings in a recent piece in Education Week that’s really worth checking out.

A growth mindset isn’t just about effort. Perhaps the most common misconception is simply equating the growth mindset with effort. Certainly, effort is key for students’ achievement, but it’s not the only thing. Students need to try new strategies and seek input from others when they’re stuck. They need this…

I’ve been working in the new digs for three weeks now – four days a week, 10 hours many days. I’m estimating that the library is about half way to where I’d like it to be.

Week 2 – organize items kept as best as possible. This is ongoing. Ron and I have joked time and time again about how we are having to move items to move items to a place that might make sense for a new home. Some cabinets are full of items that will just have to wait. Clear some more items out. This is tricky. If you move out too many things at once, you risk losing something of value. So some things you walk around and think about longer.

Because you can only deal with books for so many hours at a time without Belview employees arriving with their little white jackets, I’ve also hung some things, worked on files, and looked at 100s of VHSs. I’ve catalogued and changed call numbers on some things.

Carpets are being cleaned next Monday! Yeah! I’m staying home with my feet up. (Ha! Not really. But I will be home. 😉 )

A few pictures of the fiction section. I was going to take some more, but all the furniture was moved for Monday’s carpet cleaning adventure. The books that are just piled on the bottom shelf need genre labels. 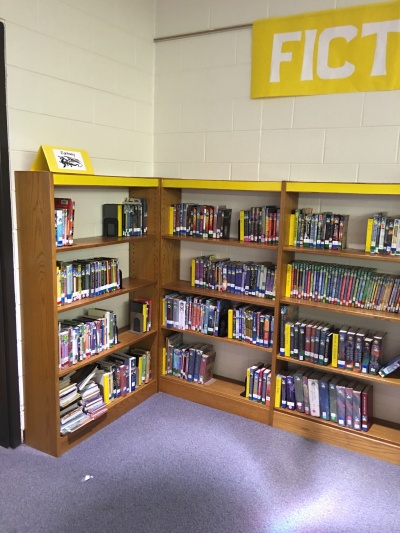 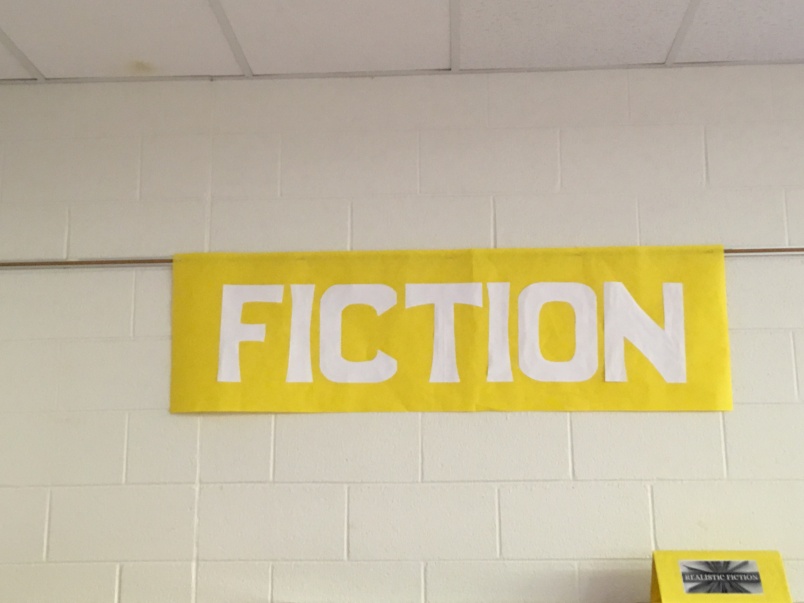 The librarian before me had started to genrefy the fiction section. He had a couple of things he’d started that he asked if I would continue, and this was one of them. Most *everything* is now sorted and shelved based on a genre. Sorting was a full two-day job since most of the books already had an identified genre. There are books in every section, however, that still need to be labeled, and I’ve got a sizable stack I need to research a bit to know where in the world they should rest.

Here are some things I’ve noticed:

I think you need some written guidelines before you start. Like:

One thing I don’t really like about this process is that an author’s work may not be together. That kind of bugs me, but I think I can work with it.

OK, now where do I put all those Barbie books?

Jack of All Trades by Bitsy Griffin is licensed under a Creative Commons Attribution-Noncommercial-Share Alike 3.0 United States License.